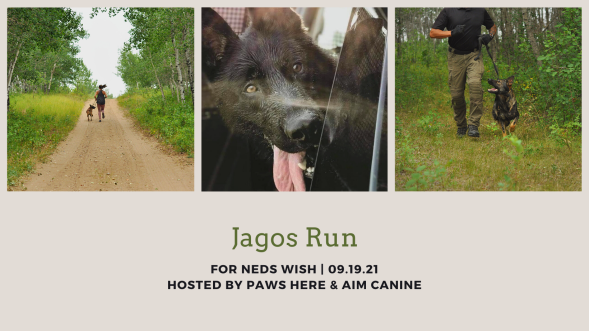 Jago’s Run - A Run for Heroes
Ned’s Wish is partnering with Paws Here and Aim K9 to create a one of a kind run-with-your-dog race experience, in Prince Albert, Saskatchewan. Jago’s Run will honour PSD Jago, who made the ultimate sacrifice on June 17, 2021, while responding to a high risk call in Northern Alberta. PSD Jago tracked a suspect for 6km into dense forest before engaging him. By doing his job, Jago saved the life of his handler, and three cover officers, while heroically giving his own. To commemorate Jago’s final track, we have set up a 6km race course and we invite you, and your dog, to honour Jago’s sacrifice and celebrate his courage by running it with us.
All proceeds from Jago’s Run will go to Ned’s Wish, where they will be used to cover veterinary costs for retired police dogs like Jago’s brother, Ned’s Wish Hero Argo.
Register For Jagos Run
Volunteer For Jagos Run

Where Are We Located?